“We spent three years working with lawyers and were finally able to come here. And so I decided to write our story about the process of living in Europe for 10 years and then deciding to move here.”

We first met Alex and Caroline and their two little daughters in person when they visited Los Angeles in 2017. What a wonderful time we had catching up. These are the moments that remind us why we do this. Love is love and family is family.   Scroll down for more!

We reached out to Alex in 2017 on the second anniversary of sharing her story and she gave us a quick update:

“Thanks so much for reaching out! Wow, has it really been 2 years since our story was shared?! That’s amazing to hear. I moved back to the Bay Area 7 months ago and my wife joined us 3 months later. Adjusting to American life has been a slow process, but we’ve managed to accomplish quite a lot in such a short amount of time.

The obvious question for us was after the election when we asked ourselves if we made the right decision in moving to the States, given our current political climate. We decided that we’d give ourselves 5 years to see how things pan out for us, and if it doesn’t work out, we’ll go back to Europe. It’s a little more complicated for me though; I’m a Bay Area native, and the longer I’m here, the more I feel like myself.

I struggle with the idea of whether happiness is in Europe, where I felt safe and had good healthcare, good social benefits, paid sick leave, 5 weeks of vacation, and didn’t stress out about much. Or whether happiness is here in the States, where there is a lot of uncertainty in what is going to happen in every aspect of our lives in this country.

At least I’m “home,” speaking my own language in an area I grew up in, eating all the amazing food I missed out on during my 10 years away, and finally re-establishing my relationships with friends and family that I left behind.

I don’t even know how all this is affecting my marriage. To say this move has been a shock to my system, would be an understatement. We’ll see what happens!” #PersonalStories

Scroll down to read Alex’s original story from 2015

My Name is Alex. This is my story. 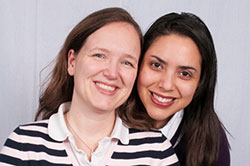 My name is Alex Navarro. I am a 30-year-old American citizen living in The Netherlands with my Dutch wife, Caroline, and our two young daughters. This is my story.

I came across your Facebook page after seeing a post by Shane Bitney Crone. I have been contemplating sharing our story for a while now, as it has to do with so much more than just the word “marriage,” but more about how being with another woman changed the course of my American life. I took it as a sign and decided to get in contact with you.

I met Caroline through an online music forum when I was 19 and she was 22. I was really into travelling and learning about different cultures and my ultimate dream was to be able to visit Europe someday. Caroline was a cool Dutch chick and seemed to have all these life experiences at such a young age while I was still trying to figure out what I wanted to do with my life. She invited me to visit her in The Netherlands during winter break and I jumped at the chance. We had chatted online for months via Skype and formed a great friendship. When we finally met in person it was as if we’d always known each other. There was never an awkward moment, and I felt really good being around her. At the end of my vacation, I couldn’t imagine living a life without her anymore.

In 2006, after being in a long distance relationship with Caroline for 2 years, we decided we wanted to be together permanently in one country. Because of DOMA, Caroline couldn’t move to the United States, so I was faced with the difficult decision of leaving everything in San Francisco behind and moving to The Netherlands to be with her. I left all my family and friends, my work, my college, my city life, and my sense of self just to be with Caroline, who lived on farmland in the middle of nowhere.

My parents had no idea I was moving to Europe for love. They didn’t even know I was in a relationship, much less with a girl. They just thought I was going out on some adventure trip for a year and would come back home when I’d run out of money or I got bored. On my first trip back home for the 4th of July I finally told them I was in a relationship with Caroline. They were extremely supportive and ever since then no one else’s opinion about me has mattered regarding my relationship.

It took a year for the Dutch government to process my new residency, and during that time I couldn’t work or go to school to learn the language. In order for me to be able to stay in the country, Caroline had to work 6 days a week for a year at her job as a restaurant manager in order to support me financially. In that time, Caroline never once complained, called in sick, or took a personal day off. It was such a stressful time, but we survived it! I was home alone all day every day with no one to talk to or anywhere to go. When I finally did get a job, it never lasted long and it was always something like: dishwasher, production worker, cleaning lady, medical product manufacturer…My parents would have been so proud *sarcasm*.

Did I really leave America for this? There were times I thought I couldn’t take it anymore, and I wanted to go back to my beloved San Francisco. But I couldn’t leave Caroline. I loved her way too much. If she could work 6 days a week for a year and not complain, surely I could work the crappiest of jobs in order to provide for us and ease the load off her shoulders.

The idea of us moving to the United States was always in the back of our minds if the opportunity presented itself. What little money we had, I’d use it to travel back home once a year, eventually maxing out my credit card just to be present at my mother’s 50th birthday. I’m still struggling to pay for that, but at least on my deathbed I’ll be able to say, “I was there on my mom’s special day.”

We always knew we wanted to have a family together, and with the help of an anonymous sperm donor that dream became a reality. In 2012, Caroline gave birth to our first daughter, Anika.

Of course, in 2013 DOMA was ruled unconstitutional and we were relieved to know the possibility of moving to the US had finally come. I had missed out on so many events back home while living in The Netherlands: birthdays, anniversaries, deaths, the San Francisco Giants winning the World Series (3 times!)….I couldn’t wait to move back home. My entire time in Europe felt like I was exiled from my own country. How could it be that folks in other western countries had more rights than Americans?

We hired an immigration lawyer and immediately started working on getting green card petitions for Caroline and our daughter. At the most inconvenient time, I lost my job. Not only could I no longer afford our immigration lawyer, but I was also pregnant with our second daughter, Rylie. Our plans were put on hold, and it seemed like everything was just going from bad to worse. Once again, Caroline was forced to work extra in order to provide for us here in The Netherlands, we had to save up for our lawyer fees, and save up enough money for the actual move to the States.

During the day she’d be at her nursing job, and in the evenings she’d be waitressing at the restaurant where she had worked years before. I was 7 months pregnant when I started delivering mail around our neighborhood, against my physiotherapist’s wishes. Up until the day before my scheduled C-section I was delivering mail 4 days a week. Of course, Caroline wouldn’t let me do all the 21 streets myself, so she would help me whenever she had time. I felt so terrible she was working 3 different jobs 7 days a week, but she didn’t really have a choice.

I’ve now been living in The Netherlands for almost 9 years. All I think about is finally moving back to California with my little family. The problem is, I don’t really know what I’m moving back to. All my family and friends have moved on with their lives, and I don’t have anywhere to go to with my wife and two children. We’re moving, but we don’t have housing. We don’t have jobs. We don’t have a car. We don’t have any money. Sometimes we don’t even have enough money to buy groceries here in The Netherlands; how are we supposed to save up enough money to pay our immigration lawyers, move, and start a new life in another country with absolutely nothing?

I feel like I’m going to be a foreigner in my own country, and it’s not fair. My parents didn’t immigrate to America so I would be exiled and have to start “The American Dream” from scratch myself. I’m just a girl who fell in love with another girl on the other side of the world. That’s it! I never expected things to be easy, but it was never supposed to be so complicated.

CLICK HERE to make a donation, a portion of which will go to Gays Against Guns and The Trevor Project to help both organizations continue their important and life-saving work.