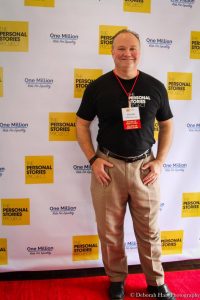 My name is Charles. I call myself an “accidental activist.” This my story.

I was born in 1964 in Charlotte, North Carolina and went to a private school in nearby Gaston County. From the time I was old enough to remember I knew there was something different about me, but I wasn’t sure what. I’d heard that there were gay people but didn’t think I knew any personally.

As I progressed into junior high and later high school I went through the motions, taking girls to the dances and proms, but funny enough all of these girls were also my best friends. I was pretty good at track and enjoyed playing soccer in the physical education classes but other than that I was never much into sports, so I was often teased and bullied by my peers.

In 1983 I had the opportunity to move to nearby Charleston, South Carolina for college. Again, I went through the motions, went through fraternity rush, and pledged and was accepted into a fraternity. Still, though, I knew something wasn’t quite right. Then I met some folks quite by accident, who were actually real live gay people, ironically, through a girl I was dating. Go figure!

Fast forward to 1989, I graduated college and moved to Atlanta and realized I had found the gay Mecca of the Southeast. Although I had always worked in the hospitality industry I made a few career changes, as we all do, along the way, and at one point I landed in a management training position with a chain of video stores. This was one of those fun jobs in a fun part of town where almost everyone was like me. I was in my element.

Eventually I met a guy through someone I worked with and we hit it off and eventually moved in together. Not too long thereafter we decided to make the across the country move to Los Angeles, someplace I had dreamed of living in all my life.

Although there are a number of years in between then and now, suffice it to say that they were both eventful and uneventful at the same time. I dated a few guys, some serious and others not, had decent jobs, became involved in a professional networking association, but still something was missing. I had not met “the” one for me, the one I wanted to spend the rest of my life with.

In 1994 I met Joseph, the man who I can now legally refer to as my husband. He was in the process of ending a relationship and I was ready for one, so we moved in together. And the rest, as the saying goes, is history.

He moved into my apartment, and a few months later I started my own business, a business in which he has been my partner since 2002. Thus began the next phase of my life. I had finally met the man who I now realize is my soul mate, a man who holds me accountable, knows what I’m thinking and occasionally finishes my sentences for me, because we know each other inside and out.

But still something was missing in our lives. We had friends who started having commitment ceremonies, but neither of us wanted to go that route until it would be recognized “for real”. Our philosophy was “why bother?” We would still be second class citizens, after all, and we knew how we felt about each other, so that should have been enough.

So we went on with our lives status quo. Things started changing in 2012.

In May of that year a friend I had worked with in Atlanta and with whom I had reconnected with via social media posted the link to a video about a young gay couple whose lives were tragically altered by the accidental and untimely death of one of them. It quickly went viral and I probably watched it at least a dozen times myself. The main message for me was one of equal love and equal rights – Joseph and I may not have been completely aware of it, but we quickly realized that we were sick and tired of being second class citizens and I didn’t want what happened to Shane and Tom, the two guys in the video, to ever happen to us.

In July 2012 I received a very interesting message via Facebook from someone I’d never met, the daughter of a high school friend. In her own words:

As we were talking it out that first day your name came up. She said her best friend had a gay brother and that he was one of the kindest and most successful men she had ever known. It still took her a while to become okay with me being gay but I feel like if she hadn’t known you, she would still be holding back to this day.

My dad still does not know, nor does most of my family, but I guess I’ll just have to cross that bridge when I get there. I believe you helped me through a situation that I might not have been able to get through on my own, and for that, I just wanted to say thank you”.

I felt gratified that my story had somehow touched and helped another person without me even knowing.

And the signs and connections continued to occur. In February 2013 my youngest sister connected me with my Personal Stories Project co-founder, Sara Christie. Her son, then 14 years old, had recently come out and Sara was scouring the internet for resources.

Sara then connected me with someone who has now become an integral PSP volunteer leader, and eventually we both put it out there on Facebook and the connections started rolling in.

While all this was going on Joseph and I began seriously discussing marriage and decided we would wait until it was “really” legal for same sex couples.

Fast forward to March 2013. The United States Supreme Court was reviewing the cases of the Defense of Marriage Act and California’s Proposition 8. We took a “wait and see” approach and went about our lives for the next several months, hopeful that the outcome would work to our advantage.

On Wednesday, June 26th we awoke to a literal explosion on all social media channels that both DOMA section three and Proposition 8 had been ruled in our favor – we were no longer second class citizens in our own country! We were working onsite at a conference together and I can assure you they didn’t get much work out of me that day, being the “accidental activist” that I have now become in my second job as Executive Director of “The Personal Stories Project”, an online-based LGBT community. I had work to do getting the word out!

Two days later California made marriage equality the “law of the land” effective immediately and shortly thereafter we were at home watching the local news when we saw what had several years ago been the unthinkable – two men getting married live on television at Los Angeles City Hall. That was all we needed. Although we had been together for almost 20 years, I made plans to officially propose to Joseph.

The next day we were on our way to Bermuda for a business trip. I had made arrangements with our hotel contact to set the whole scenario up so I could “pop the question” over dessert, with a beautiful Bermudian sunset in the background.

Luckily, he said yes and we were married in August 2013. And that’s another story I’ll share at some point in the future.

Although at the time I’m writing this I’m less than 6 months from my 50th birthday it seems that my journey has just begun, both as a married man and as an accidental activist. Thank you for joining us, reading our stories, and sharing your own stories.

Together we can make a difference! CLICK HERE to make a donation and help us continue our important work to help change hearts, minds and lives.