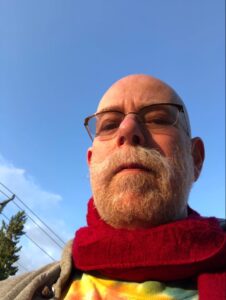 “I have marched in or attended Pride parades all over the lower 48! Massachusetts, Seattle, Phoenix, San Francisco…Pride to me is like a bunch of old postcards, like the ones people used to send to each other while on vacation. I was at one of the first Pride parades in Miami somewhere around 1977. The parade route was one lane of traffic on a busy downtown street with cars whizzing past right next to us. More people were booing than cheering! I think there were maybe four floats, the biggest was the Copa with all the popular drag queens! I marched that year with the Metropolitan Community Synagogue. I hate to mention the name, but Anita Bryant was the driving force behind a lot of the hate back then. At some point the ‘dam’ broke and Pride became a ‘thing,’ something that buses were rerouted around and people’s plans became based on what you were doing for Pride. Years later I had a boyfriend. We were called ‘lovers’ by members of the community and ‘fags’ by the sheriff’s department. Deputies used to write down the license plate numbers of the cars parked by the only gay bar in Tallahassee, where I was living at the time. In 1994 I attended Stonewall 25 in New York City, which was about the exact opposite of the first parade I marched in! A mile long Pride flag was carried through the streets of Manhattan. Billboards all over Times Square were gay themed. Even Newark airport had a welcome table! By then my lover Doug and I had been together more than 12 years and he was dying of AIDS. He passed 3 weeks later. Five years ago, I found myself in Portland, Oregon, engaged to my high school sweetheart. Watching a parade bigger and gayer and more festive than any other. The Supreme Court had ruled in favor of same sex marriage. Even that seems like it was a long time ago! I’m Inclined to believe that Pride is a path. My path has meandered through 40 years and many cities and led me to who I am and where I am today.” Corey from Portland, Oregon. #PersonalStories