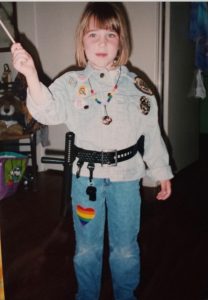 My name is Cori Bratby-Rudd. This is my story.

I was two when I found out my moms were gay. Well, at least that there was a word for a family like mine. I remember sitting in daycare, telling a basic story about Momma Tami and Momma Debbie when another child began laughing and said “That’s silly! You can’t have two moms.” Lesbians are as American to me as apple pie, but it didn’t take me long to realize that the rest of the world didn’t think the same. I never would have known I was different, except for when I did realize, I felt that difference for the rest of my life.

Now, as a twenty-three year old gayby, or adult queerspawn as some online blogs have named me, I sit drinking a canned Keystone Light and try to think of a way to describe my experience. People always ask me to speak, people always want to know what it’s like.  Across from the couch where I sit writing is my wife, Diana. She’s trying to learn how to play the Beatles’ Blackbird on the acoustic guitar and amidst the missed notes and the hit ones, I run though memories of my childhood.

I run through memories of small grass in the backyard and theatre productions made by all the neighbor kids, but these aren’t the stories folks want to hear. They want to know what it’s like. To be honest, I am not sure how to answer this question – what it was like to have my moms involved dancing in the kitchen, crying in the kitchen. Revoked wedding invitations and family members saying, “You can’t sleep here because we are Catholic.” The only thing I have to say is that it’s like getting asked questions all the time. If I had to sum up being a gayby it would be the life of an alien, the life of the questioned.

I easily fell in love with Zach Wahls and the movie “The Kids are All Right” because they were the only exposure I had to others like me. I grew up amidst wide eyes and questions, amidst the brief yet expectant, “What was it like?” “Do you wish you had a dad?” “Are you going to try to meet your sperm donor?” “Did your parents try to make you gay?” “Which mom is the real mom?”

And with a question naturally comes an answer, or at least the expectation of one. And so my life is a life of fear. A life of wondering. What if my words mean my parents will lose their rights? If I say it was hard, will artificial insemination be outlawed? Is a white lie better than the truth? But if I don’t say what it was really like, how will they know to change?

I fell in love with Diana when we walked onto a Los Angeles beach at midnight. I looked at the yellow hazed sky – it never seems to get completely dark in L.A. – and told her I wished we could see the stars. She grabbed my hand and told me, “No problem. I’ll take you there.” After driving two hours to Angeles National Forest, and spending the night in a silver Jeep, I knew I couldn’t pretend to be straight anymore. 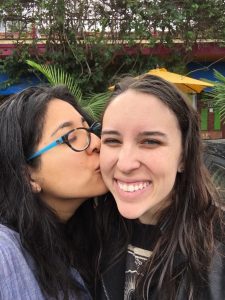 I desperately wanted to be straight. Not out of fear of queerness. I love my community. I wanted to be straight because I wanted to prove that my moms in particular, and lesbians in general, could be good parents. I thought being perfect would mean my moms could have rights. Zach Wahls went on Ellen and she applauded his straightness along with his degree. She pointed at him and said look, “Here is a straight successful man raised by lesbians.”

I thought about the UCLA degree hanging on my wall, and thought to myself, “Well, I almost made it.” I felt like having another beer, or six, and I fell in love with Edgar Allen Poe and ravens because I thought my own sexuality would negate my voice. I thought I would be the evidence they used against me. And so, because you are a lesbian, you cannot have kids with the woman you love!

I wasn’t wrong. When I came out, my grandmother clearly stated, “Well, we won’t be coming to the wedding.” I could hear her curled lips thousands of miles away. Now, instead of “What was it like?” I get asked, “Is that why?”

Blackbird is beginning to come together; the tap of the beat reminds me that I’m home. In love, in pain, in isolation, but together. Being a gayby was about the questioning, but it was also about being afraid to answer. My question is if my moms weren’t good moms does that mean they shouldn’t have had the right to be moms? I think many people on queer sites might agree that my being bisexual does mean my parents were not good parents.

But I wonder, are there other gaybys out there afraid to tell their truth because their truth might be more complicated than simply “All lesbians are perfect?” What if one mom throws an ice tea at the other, like mine did? What if the other mom threw the chess board in the middle of a failing match? Are we allowed to talk about queer domestic violence? Are we allowed to talk about discrimination? Is discrimination too hard for the kids? How many stories get lost in the art of trying to find perfection? If perfection is acting like straight people, I would rather go “Into the light of the dark black night.”

I have decided that my goal is to no longer appeal for my rights; my goal is to simply to be unapologetically myself. After all, what good is fighting for rights if we are still hiding?

Cori hopes that sharing her story can help others. A portion of your tax-deductible donation will go to go to Colage, an organization offering support and community for children of LGBTQ parents. CLICK HERE to make a donation today!