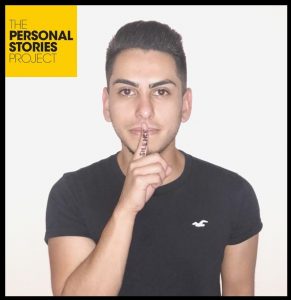 “Today is GLSEN’s #dayofsilence Never be bullied into silence. Never allow yourself to be made a victim. Accept no one’s definition of your life. Define yourself! I stand and fight for those in the LGBTQ community who do not have tools and privilege to speak up.” – Michael Garcia

“GLSEN’s #DayofSilence is a student-led national event where folks take a vow of silence to highlight the silencing and erasure of LGBTQ people at school. In 1996, students at the University of Virginia organized the first Day of Silence in response to a class assignment on non-violent protests with over 150 students participating. In 1997, organizers took their effort national and nearly 100 colleges and universities participated. In 2001, GLSEN became the official organizational sponsor for the event.

Nearly 4 in 5 LGBTQ students don’t see positive LGBTQ representation in their curriculum, nearly 9 in 10 experience verbal harassment, and almost a third miss school for feeling unsafe or uncomfortable. The Day of Silence is a national movement to highlight the silencing and erasure of LGBTQ students in school, which demands that school leaders take action to be more inclusive.”

This morning I saw that Michael had posted the picture above and asked his permission to share on our page. Before doing so I also Googled “Day of Silence” so I could post more information and was saddened, yet not surprised, that the first entry that came up was from the so-called “American Family Association,” an organization designated as a hate group by the Southern Poverty Law Center, and with good reason – their post lists all the reasons they think parents should keep their kids home for the day if their school participates in Day of Silence.

Here’s just a little bit of what they had to say (from their website; I won’t link directly to such groups, but it’s easy to find by Googling “American Family Association Day of Silence”):

“During this all-day event, student activists and even school officials encourage students to be silent for the entire day as a sign of solidarity with the international LGBT movement. Students are encouraged to wear special pro-homosexual badges, stickers, and bracelets – which are often handed out at the school entrances that day. There are also pro-LGBT posters in the hallways, handouts, and even workshops. Although the adult activists claim that the ‘Day of Silence’ (DOS) is put together by ‘students,’ it is in fact organized behind the scenes by adults with the enthusiastic cooperation of school officials. They use materials and instructions from a national homosexual activist group. You can actively oppose this hijacking of the classroom for political purposes and help de-politicize the learning environment by keeping your child out of school if your child’s school participates, promotes or allows ‘Day of Silence’ activities.”

My favorite parts? Their implication that GLSEN is a “national homosexual activist group” and the words “hijacking of the classroom for political purposes.” Puleez! GLSEN’s actual goals are very different. They believe that every student, in every school, should be valued and treated with respect, regardless of their sexual orientation, gender identity or gender expression. They believe that all students deserve a safe and affirming school environment where they can learn and grow. What I wouldn’t have given to have had access to GLSEN when I was a student!

My advice to today’s students? Speak up and speak out. Speak loud and be proud. Don’t let them silence you; don’t let them try to stop you from being yourself.

We are proud to support GLSEN as one of our annual donation recipients to help them further their important and life-changing work. CLICK HERE to make a donation today, and select GLSEN from the drop-down menu.

Thank you, Michael, for continuing to speak out. It’s young people like you who make the world a better place.