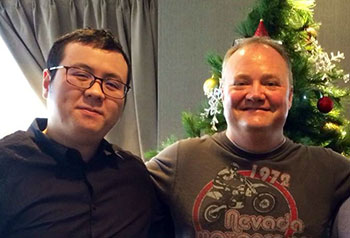 My name is Ernst. This is my story.

I had heard about the power stories can bring but I didn’t really think much about it until I experienced it myself. Stories have the power to influence one’s mind and heart. I now believe that if a story even manages to reach into a single individual’s heart, it can create a ripple effect, changing our lives in ways we wouldn’t imagine possible.

I was born in 1990 in Kedah, Malaysia. Malaysia is an Islamic country and homosexuality is illegal. I went to both primary and secondary school here in the small town of Sungai Petani. As early as 7 years old I realized that I seemed to be more attracted to guys, always wanting to be closer with them than to girls. The word gay/homosexual had yet to enter my mind at that time and I didn’t pay it much attention, thinking it was most likely just normal.

It wasn’t until I was 12, after I entered secondary high school, that I started to realize that my attractions weren’t exactly “normal.” Guys were always talking about girls and they seem to play the typical heterosexual stereotype role well, participating in sports, labeling things as girly/sissy because they do not fit the typical “man” role as was expected of society. I found it much easier to befriend girls compared to guys, perhaps because of the lack of pressure and attraction.

I was a shy, introverted guy and was bullied and teased often. I kept the pain and feelings all to myself and never really let it out. During my secondary school years I was a pretty lazy and unmotivated person. My father has a short temper and would often snap at the family for any mistakes during that time. For example, there was a time where I was strangled due to a misunderstanding; there was also a time where furniture was flung at me and I was locked in a cage. I never wanted to consult my family when it comes to any matters as I feared it might only lead to more pain and suffering.

The secondary school years passed by quickly and eventually I was headed to an overseas college. That was when I felt that I had had enough. I decided to confront my father about how I did not like his temper and that led to a fight, and afterwards I cut off all contact with my family. I eventually flunked out of college due to depression and did not see things changing for the better. I often asked myself “What was the point in continuing?”, believing that even if I got a job I was going to be alone for the rest of my life. Thoughts of suicide crossed my mind.

When I returned to Malaysia things changed. Perhaps my family realized that if things continued the way they had been our relationship might be strained beyond the point of repair. It struck a chord within me, that nothing will change if one does not speak up.

After I was settled back in Malaysia I re-enrolled in my studies and in 2010 I started to explore the local gay scene. I never dated anyone throughout the time, as when it came to such apps and websites, people seem to be more interested in one night stands or as they call it, “no strings attached.” Somehow it seems that it is a requirement to divulge your stats in order to be “friends.” I ended up just shying away from it most of the time and fell back into the same cycle, just living life in depression as I felt that what I am seeking is impossible to find here in Malaysia; that there is no love to be found here.

I started working in 2012. Throughout the time period where I was studying and working in Malaysia, it was common to hear people making jokes and about gay people and laughing. When it comes to the gay life around here, the gay people that I know of are either married to the opposite sex, in an unrecognized relationship, or just having flings all around (yes, this includes men married to women). Some cite the reason that it’s impossible to find love here or that they could not see where this relationship leads to, while others consider it their obligation to society and family hence they choose to marry a woman instead. None of these scenarios are what I want; I just want to find someone that I can fully love with my heart, in other words, my soulmate.

In 2013 things started to change for me. It may have been a coincidence to come upon those stories, two stories that I saw and read about that changed my mind and heart about how I wanted to live my life. One is a truly heart wrenching tale of a young gay couple, Shane and Tom, whose lives were changed due to Tom’s accidental death. Deep down inside I thought that it was just not possible for such love to exist between gay couples. Yet the sadness that I saw Shane experience and the things he and Tom both did together altered my perspective. It was nothing less than pure love, and everyone could only wish that they had the kind of love Shane and Tom both had. To borrow the quote from their documentary, Bridegroom, “It is not a gay thing. It’s not a straight thing. It’s a human thing.” Love is a human thing. Their story both broke my heart and made me see things in a different light.

The other story that I saw was the lovely Home Depot proposal video uploaded by Spencer in Salt Lake City, Utah, where he proposed to the love of his life, Dustin, with a flash mob dance. It is hard to describe the feelings that welled up within me while looking at the video, there was so much happiness in it. If I had to put it into words, it was no different that the kind of love I saw from Shane. It made me believe that love is possible. This was the story that connected me with a mutual friend, Charles Chan Massey. I reached out to both Dustin and Spencer on social media, and through them connected with Charles.

In December 2013 I received an email from my mother with her take on some news she had read about a gay couple. She stated that they were insane, and they were having an unacceptable and abnormal relationship. That was when I realized that indirectly and unknowingly, she was referring to me along with the LGBT community as well. I decided that I should come out to my family as it had been eating at me; I was sick of people assuming that everyone is a heterosexual, and constantly questioning when am I getting a girlfriend, and from family members who automatically assume that every female friends of mine are somehow magically my date throughout the years. I came to the realization that change won’t happen for me unless I take that very first step, speaking up about it.

And so I came out to my family. It was a nerve-wracking experience, pondering what to say to them. In the end, my father accepted it with acquiescence, harboring the hope that I might change; my mother on the other hand just refuses to talk about it when I bring it up. It doesn’t matter that much to me anymore though; I am sick of living up to someone else’s expectations. I am thankful that I am one of the few lucky ones, as not every family reacts mildly to such announcement.

It baffles me when people claim that sexual orientation is a choice or a lifestyle. It’s as if they aren’t even trying to understand human sexuality. I most certainly did not possess the complexity to even make the decision of being attracted to males at the age of 7. The only real choice here would be to either live a life of suppressing oneself or choose to be true to one’s own feelings. I am really glad that despite living in a conservative country, I had the opportunity to get to know friends from the LGBT community and broaden my perspective about the world.

Never could I have imagined that a single story could lead to such a chain reaction; it is too much to be a mere coincidence in my opinion. From reading about the stories, leading up to getting to know such wonderful people, and even meeting one of these amazing guys and his husband last year (2014)! I am truly grateful for all that has happened so far, and can’t wait to see what the future holds for me!

My story comes to a close around here. I am planning to continue my studies at the start of 2015 while working towards my goal of migration to another country. There is a message that I would like to deliver to anyone reading this: there is absolutely nothing wrong with loving someone. Love is love, everyone is different and nothing is wrong with being different, it’s as simple as that. Life is too short for one to live it just to please others.

Thank you for reading my story. I hope you enjoyed hearing about my journey!

Ernst would like you to consider making a donation to The Personal Stories Project, a portion of which will go to The Trevor Project. CLICK HERE to donate.