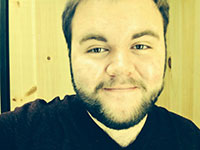 My name is Garrett Piersa. This is my story.

My story is not unique, sad as that may be. My story is the story of many gay youth across the historical “South,” and much of my life has been controlled by the ignorance, fear and hatred of other people.

I was always different from other kids my age. I never really realized how, until I was older, but I knew that there was something about me that set me apart in some way. I remember a lot of little quirks throughout my childhood, like dressing up in my mom’s dresses and high-heels, getting into her makeup, being flirtatious with some of my male friends (even though I wasn’t old enough to really comprehend love and intimacy) and saying that I had a “boyfriend.”

It was when I was in fifth grade that I was the target of anti-gay slurs for the first time. I was at school and my class walked down the hall to the library for the annual Book Fair. As I stood there, looking around, I saw a group of girls gawking at posters of male celebrities. I walked over and exclaimed “yeah, he’s cute!” A boy in my class heard me and became immediately disgusted saying “that’s gay,” and calling me a “faggot.” At the time, I was not totally sure what that meant, but I knew it was not meant in a nice way.

When I was younger, I was a bit of an outcast. Through the elementary school years, I had only one or two close friends and was bullied relentlessly over many of the things that made, and make me who I am today. However, as I moved on to middle school, the bullying eased up a little and my circle of friends expanded. Unfortunately, though, the other kids continued teasing and bullying me over my perceived sexuality, especially in gym class, where I was the subject of many an anti-gay slur or joke. Looking back, I would say deep down I knew that I was attracted to the other guys, but I had not totally come to terms with it; at least not enough that I felt ready to come out.

Their words hurt a lot, and caused me to start really questioning my self-worth. As I began the latter part of middle school, my self-esteem collapsed, thinking that being “gay” meant that I was not normal; I was not like the other kids and did not deserve love and happiness and success like they did. I felt like a hideous, abnormal, gay monster; a “weirdo” and a “freakazoid.”

To add insult to injury, in eighth grade (when I was twelve years old), my father and I fell into a heated argument about whether same-sex marriage should be allowed in the United States. Through several sharp remarks (my mind was so tired of arguing I drew a blank) I stood there for a second, and then not even thinking about what I was saying to him (my dad has always been more socially conservative, and was raised in a religious household), I shouted “well, what would you do if I was gay?!” His response still sends a chill through me to this day. Without skipping a beat, and with a completely straight-face, he replied “I’d have to kill you.”

“I’d have to kill you.” That mere suggestion from my own father—the man that’s supposed to love me unconditionally—would haunt me for years, and only make my lack of self-love so much worse.

At the start of high school my circle of friends continued expanding and I wasn’t bullied nearly as much, but the years of being picked on had done their damage. I was struggling badly with depression. By that point, being confident enough in myself to be who I truly was seemed like a novel concept; something viewed with cynicism and sarcasm. I needed to free myself, but I was terrified of what people would think. I had this need to just “fit in” and seem “normal,” but I also knew I could not keep hiding, for the sake of my mental and emotional well-being. So, I started slowly but surely coming out as bisexual to friends and classmates. This was false, as I am not bisexual, but it seemed like the only way I could reconcile both the need to be myself, and the need to fit in and not risk the ire of my peers.

For a time, this approach worked. I was free to be attracted to the same sex, and for better or for worse, no one said anything because they thought I was also attracted to women. So, presumably to them, I was “sort of straight” and that was better than being a full-fledged “homo” and “shoving it in their faces.” I did date a woman for about a year, and we were quite serious. That was the high-point of it all. To this day, I say she saved me from myself; not in a sense that she turned me “straight,” which is very much impossible, but that she made me feel like I could love again, and that it was possible for someone to love me. Eventually, she left me, and although I was devastated, this initiated a critical period of soul searching. In the year after our break up, I finally had enough of tormenting myself. The lightbulb went off and I said: “Enough. I’m tired of letting what others think of me, control how I feel about myself.” It was then that I took a long, hard look in the mirror and said “Garrett, you are a gay man.” All of my friends said that they “knew it all along,” though I was quick to remind them that yes, you can be bisexual. I used it as a façade, but I was wrong for doing that.

After I came out again to all of my friends, it was time to come out to my family. My mom was the first to find out. I had already come out to her as bisexual previously, but one morning, she was going through my phone and saw the “I love you” text from my first love interest. She called me later that day to talk to me about it. As I broke down in tears, all of my fears about my family abandoning me and the horrible things dad said to me when I was younger burst forth in an emotional tirade. Yet, to my pleasant surprise, my mom did not abandon me. She did not judge me. While choking back tears, she told me she loved me and that she had my back and would always be there for me. I never felt such mental, emotional and spiritual relief. It is true what many folks say—coming out is like having a heavy burden lifted off your shoulders.

Over the next several months, we spent a lot of quality time together. We talked a lot, especially about how my dad would react when he found out. I was terrified of the prospect, given our previous exchange, but I knew it was going to happen, and that I wanted it to happen sooner rather than later. I was incapable of keeping up the image of who he thought I was or should be any longer. I was done living a lie.

When I was nearly twenty years old, my worst fear came true. He did find out. I was older now, more mature, and stronger, so I was not nearly afraid of the physical retaliation I might have expected when I was twelve years old. Coming out to him was not easy and was filled with cold, emotionless texts when he wouldn’t speak to me for the first week, followed by more tear-soaked, emotional tirades. It was me who cried, because as hard as I tried not to be angry, all of the pain his words caused me over the years came surging back to the surface.

It could have turned out far worse, though, and I’m thankful that it did not. He eventually hugged me and told me he loved me, and we tried to work out an agreement to foster greater respect between us. I made it very clear, though, that I was out, and that being out, I was going to own who I was and would not be forced back into the closet. That did not sit well with him, but I am better for it. There is no more smoke and mirrors, no more glass facades. I have to be one-hundred percent “me,” and I made a point of that.

Realistically, I believe that deep inside of his heart he can see through the fact that I am gay, and can see me as his son—the little boy he once held in his arms. The boy he took fishing and camping, the boy who stayed up late stargazing with him and talking about life. I am not so different than before when I was in the closet. I would like to believe he knows that. I am also not scared of him anymore. I love my dad, despite the things that were said, and I do forgive him. I have to forgive him, because neither of us will ever heal or reach a place of better understanding if I hold onto the pains of the past (consider this article my final letting go).

Since coming out to both my friends and family as gay, my life has made a few interesting turns. I took action to undo the damage that was inflicted on my mental and emotional state and sought out professional help. Going to therapy was one of the best decisions I ever made for myself, and has really helped me to develop a strong sense of self love and confidence—especially in the past year.

Also, I was accepted into Virginia Commonwealth University, where I recently decided to study Political Science with a concentration in Civil & Human Rights.

We are seeing some amazing advances in LGBT equality, especially in the United States, but there is still so much work to be done. That is why I want to dedicate my life to fighting the good fight, and ensuring that people like me, all over this country, are free to live and love and be who they are—without fear of persecution. I already participate in a lot of “cyber activism” and networking, and I cannot wait to begin this next step and move to the front lines.

My story ends here. If you are reading this and you are in a similar situation, or worse, I want you to know that it is true: you are not alone. Believe me when I say, I understand how hard coming out can be. “Fear of the unknown” is a powerful deterrent that often keeps us from exploring our full potential. Know though that you are loved by so many people–myself included–and you have to break free; you have to spread your wings and fly. A gigantic world is waiting and it needs people like you. It needs people like you to share your stories, to create beautiful things and to prove to the world that you and I are just another part of this big, beautiful human mess. It is getting better all the time out there. You just have to keep believing and never give up hope.

My hope is that my story will show other young people who are struggling with coming out that, though the journey can be very trying and often seem hopeless, the end result is more than worth it. I would like for donations to go to the Trevor Project. I love the work they’re doing with LGBT youth and suicide prevention.

Please CLICK HERE to donate, a portion of which will go to The Trevor Project in Garrett’s honor.