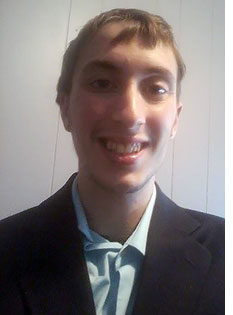 My name is Justin. This is my story.

I first knew I was gay in middle school. I had a crush on one of my best friends and always checked out guys in the the locker room, so I knew that I was attracted to other guys.

I came out after high school. I told a former pastor about my sexuality and she responded, “Are you sure?” because she was worried about how my father would feel about my sexuality. After telling my pastor I told other relatives through Myspace messages, including my mother, my aunt and a few other relatives, all of whom accepted me. However, when I emailed my grandmother, who I had been close with since I was a kid, she did not agree with my sexual orientation stating that “it was a phase” and telling me I should seek counseling. I learned later that my grandmother had forwarded the email about my coming out to other relatives on my father’s side.

My father, on the other hand, found out after we had an argument in the car. He was taking me to practice driving when I told him that one of my cousin’s friends wanted to take me out to a gay club. He got upset and told me to drive back home. It was then my father ran up the stairs to my grandmother, the grandmother who had outed me to other relatives, who had lived on the second floor of my dad’s house. My grandmother showed my dad the email I had sent her. He could not accept me being gay and began to verbally abuse me. He had a previous history of verbal and physical abuse to my mother when my parents were together. After he found out about my sexuality, his verbal abuse towards me got worse.

It was then that my mother told me I could stay with her, but because of my stepdad I did not feel safe there. So, I made a choice: I quit my job and told my mom I was going out to a gay club. My mom and stepdad said if I left to go to a gay club I could not come back home. My stepdad did not work and I tried to help provide for my mom and sister. But, I could no longer live there and decided to go out one night and never return to my mom’s house.

I had made a decision. The next day I packed my bags and left. I was officially homeless. I contacted an older friend of mine who brought me to a shelter called Sylvia’s Place located in New York City, which is an LGBTQ shelter. However, one night another roommate falsely accused me of taking something. The next day, as I was leaving the shelter around 6 am, the roommate followed me a few blocks away from the shelter and out of nowhere attacked me, resulting in my having several abrasions. I tried to go back to the shelter to report what happened but they did nothing. So a guy I was dating at the shelter at the time went with me to walk the many blocks to the nearest hospital in Manhattan.

A few weeks later the social worker at the shelter suggested that I relocate to another shelter in Manhattan for my own safety. I stayed in that shelter for a few weeks. Before deciding to return back to Connecticut, having no direction, I was in several shelters until I met a guy and eventually we ended up getting our own place together.

After coming out I suffered from depression, anxiety, and PTSD. The PTSD was mostly from my father due to his verbal and physical abuse, as well as being sexually abused by a guy I had seen when I was 18. I did not want to have sex with him, but he had pushed me down on the ground in his apartment and sexually assaulted me. My anxiety also comes from memories of what happened to me after coming out. I have never had thoughts of committing suicide.

I was bullied in high school. I attended a technical high school in my town and was taking culinary arts. One day I was getting changed in the locker room and another student from my culinary arts class took out his privates and tried whipping it in front of my face, calling me a faggot, saying he knew I wanted it, humiliating me in front of the other students. The same guy tried to drag me into a stall and tried dunking my head in the toilet. The high school I attended did nothing about the bullying I endured.

My advice is to never be afraid of yourself. Be who you are. When coming out, remember that you are not alone and in times of rejection that there are always resources out there such as The Trevor Project if you feel suicidal. Remember that suicide is never the answer. And always remember that it will get better.

I would like to use my personal story to support The Trevor Project. They are an excellent organization offering a 24/7 suicide hotline. They also offer many other resources for LGBTQ youth.

CLICK HERE to donate. A portion of each tax-deductible donation will go towards the important work of The Trevor Project.