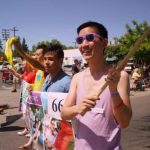 My name is Justin Kamimoto. I am a 24-year-old Asian American living in rural Fresno, California. This is my story.

Born and raised in the Bay Area of California, I have been an advocate for others since I was 13 years old. My advocacy began with an organization called Invisible Issues club where I helped raise $19,000 to build a high school in Cambodia. I have always had a passion for helping others.

After my move to the Fresno area, and leading up to my first LGBT+ experience, I discovered what suppression was in November 2008. Proposition 8 was on the ballot and became visible through “Yes on 8” signs in front of businesses, churches, and along sidewalks and lawns of neighborhoods, including the one that I lived in during my teen years. As a youth, I witnessed suppression of LGBT+ individuals at my high school, which was directly across the street from a church that proudly displayed a large “Yes on 8” sign.

Three months after my move I founded the Clovis North Gay-Straight Alliance (now called the Gender & Sexualities Alliance) to empower youth. It was at that moment that my LGBT+ advocacy became the voice that began guiding me – and in time, others – toward the direction of feeling confident and empowered.

In late 2010, while thinking of ways to unify the community, I created a Facebook group called LGBT+ Groups of Central Valley. Within three days more than 250 people, half of them youth, had joined the group and started seeking advice about coming-out, resources to aid themselves or people they knew, and support from LGBT+ individuals.

Seeing a need for online resources I created a solution called MY LGBT PLUS in November 2011. MY LGBT PLUS is available for community members to access at their own convenience, fulfilling the needs that (1) people want to connect with resources; (2) there should be opportunities for people to interact with each other; and (3) the community needs to support each other in areas where they live.

Through the success of the Facebook group and website, MY LGBT PLUS soon became a new hub of information. My spearheading of this organization, with the assistance of a dedicated team of youth from diverse backgrounds, supportive parents, and straight allies allowed for new discussions to begin.

Since its inception, MY LGBT PLUS has surpassed all expectations and continues to grow. In 2015 MY LGBT PLUS worked alongside Facebook Stories and created a video telling the story of what we do in rural California. That video went viral and showcased our Fresno Rainbow Pride celebration and displayed our community to over 1.2 million people around the world.

After that, our team began to grow and in November 2013 we created a homeless meal distribution program called Fresno’s MEAL (Meals Engaging All Lives). For four + years, Fresno’s MEAL distributed more than 6,600 homemade meals from my home to folks living on the streets of Downtown Fresno. CLICK HERE to view the Fresno’s MEAL archived site.

The power of the youth doesn’t stop, however! With the great help of our team, In April 2017 we opened COMMON SPACE, a nonprofit incubator that brings people together to collaborate and create incredible possibilities. We self-funded COMMON SPACE to recover services and programs that our community had lost when the local LGBT+ center closed. It was with great joy and pride that we announced that COMMON SPACE had become an official 501(c)(3) nonprofit organization in March 2018.

The future looks bright. Our goals include the creation of a mobile medical pop-up clinic, offering HIV testing, helping others start new nonprofit organizations, helping existing nonprofits become sustainable, and, most importantly, continuing to be a safe place for all people to thrive.

When people ask me “Why do you do all this?” my response is, “Why not?” My role is simply to listen, to learn, and to help provide a solution to a void. In return, this process has helped me continue to grow as a person.

Justin hopes that sharing his story will help empower others who want to make a difference in their own communities. CLICK HERE to make a tax-deductible donation, a portion of which will be donated to COMMON SPACE to help them as they continue to grow and provide safe spaces for the LGBT+ community in Fresno and the Central Valley.

Editors note: Justin first came onto The Personal Stories Project’s radar because of the “Facebook Stories” video about his work, referenced above. CLICK HERE to watch and learn more about him and MY LGBT PLUS.