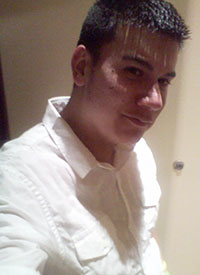 My name is Matt. I live in Albuquerque, New Mexico. This is my story.

I began to realize I was gay when I was 14 years old. Throughout middle school and high school I only hung out with other boys. At first I said to myself, maybe I am not gay. I do what the other boys enjoy: playing sports and video games. Then, as time went on, I realized that I was attracted to the boys I hung out with, but I kept these feelings to myself. As the months passed I experienced this attraction even more, and said to myself: “Yes, I’m gay.” I remember how I was obsessed with actors in Hollywood, because to me these were the ideal men to date and I wanted someone just like them.

At first I told only a few people I was gay, including my best friend at the time, my cousins and another good friend. I continued to live life as usual without telling anyone else. Then I remember thinking one day “I have to tell my family.” The first family member I told was my stepmom. She said, “I could tell you were gay” and then I remember telling her “please don’t tell my dad. I will tell him when I’m ready.” Though she promised not to, the next day she told my dad that I was gay and I was so upset I ran off crying. Moments passed and I came back and my dad said, “Son, I love you for who you are, not for what you are” and hearing him say that lifted so much weight off my shoulders.

I told my dad and stepmom I would tell my mom when I felt comfortable to do so and said, “It might not be for a couple years though.” Days went by and I was thinking of how I was going to tell my mom and then I found the courage to tell her. I said to her “I need to tell you something and I don’t want you to hate me for it.” I told her to guess and she guessed and guessed different things I might have done wrong. Finally I said, “Mom, I’m gay” and then I started to cry again like I had done something wrong. She said, “Son you’re young, and still have a full life in front of you and you don’t know if you’re gay.” I said, “I know, but I can feel it.” My mom realized okay my son is gay, and said, “I’m going to love you no matter what.” I felt relieved that I finally told my family members who needed to know. Later on that year we told my brother and sister and everyone was okay with it.

At school I only told my best friend and another good friend at the time. I remember they were okay with it and I was glad, because I didn’t want to lose them as friends. After some time my supposedly “good friend” told some of his friends and they treated me badly, calling me names. Then he told his family and I remember his mom telling me to leave her son alone, that I was going to turn him gay by hanging out with him or by looking at him.

My best friend accepted me. He just said, “Don’t do anything gay towards me.” I respected his feelings. The summer after I graduated high school my best friend moved away and we lost contact. Now, nine years later I found him on Facebook and reached out to him. He reads my messages, but he no longer wants anything to do with me.

Life right now could not be any better. Yes, I have my ups and downs, but who doesn’t? I have met many people in my life who accept me for who I am and I have met others who would not accept me and never will. Most everyone in my life knows I am gay. Certain people still do not know (but they have a clue).

I have always said that the only people who matter in my life should know I’m gay but now I really don’t care who knows because I’m proud of who I am. I think the hardest thing in life right now is not really having a lot of friends – not because I am gay, but because some people are just ignorant. I have a few close friends I am thankful for in my life to support me through the good and bad times. I would rather have a few close friends than a lot of fake people in my life. I have to thank my family for being there for me through the good and bad times too, especially my mom.

I think the proudest thing along in my journey is not caring what others think about me and living life to the fullest. I know that might sound cheesy, but it is true. I love myself for being me and you should love yourself for being you too. I think sharing my story can help others going through the same things I experienced. What you need to know is that you have to love yourself before you can love anyone else.

I want to be an advocate for the LBGT community and change lives one day at a time like many of you are already doing, especially my hero and inspiration, Shane Bitney Crone #TapTapTap. One day I hope to meet Shane. He is already part of my everyday life and a day does not go by that I am not thinking about him.

As part of the Personal Stories Project I would like people to know that though life is hard at times, do not give up, please do not give up. Do what makes you happy even if others do not understand.

I don’t know of many LGBT organizations where I am from, because I do not keep up with them, but I would like for people to support Equality New Mexico. Please CLICK HERE to make a donation, a portion of which will go towards the great work they do.