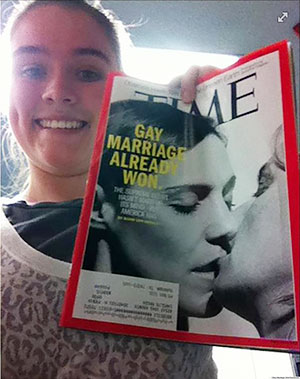 My name is Morgan. This is my story.

In May 2013 I was a senior at Sundown High School in Texas.

We were taking pictures for the school yearbook’s “Senior Who’s Who?” page. One of the two superlatives that I earned that year was “Most Political.”

For the picture I decided to hold a political magazine to make it look like me and the other student in the picture were having a political discussion. I chose to use the now famous copy of TIME magazine that had a photograph of two women kissing on the cover.

The student photographer refused to take the photo because of the magazine I had chosen and the other student refused to be in the picture with me. The photographer and I got into a rather heated argument about the matter and when he still refused, I went to my principal, who told me that gay rights was not a topic that he wanted discussed at the school. He then told me that I either had to use a different magazine or not use a magazine at all.

I decided that it was not in my best interest to choose either option. I chose to stand up for my right to use the copy of TIME magazine that I had initially chosen.

After school was out for the day I couldn’t get any of this off of my mind, and I realized that the issue was no longer about the magazine and photo but about the discrimination my school was holding against the LGBT community and the infringement of my basic constitutional rights.

The next morning when I got to school I spent over an hour decorating my locker in protest of the discrimination I was facing. However, not even an hour after I had finished, the principal tore it down and when I protested he claimed that it was “distracting.” He called my mother, hoping to get me in trouble, but instead she took the day off from work and came to the school after a heated phone call with the principal.

We quickly argued our case, giving reasons why the treatment I was receiving wasn’t fair and calling him out for discriminating against me and the LGBT community. He still wouldn’t budge so we threatened to call a gay rights organization so that everybody could learn about the discrimination being practiced at my high school. As the threat of media attention loomed over his school he decided that he would allow me to use the magazine in the photograph for the yearbook after all.

I then posted my story to Gay Marriage USA’s Facebook page. Within the first hour it already had about 1,000 likes. To date it has been shared more than 3,000 times.

My story would go on to become viral, garnering nearly 10,000 likes and thousands of comments. I had tons of support on Facebook and the Internet but at school it was a different matter. Being an ally here in Texas is just as difficult as being LGBT here in Texas. It is not a stereotype to say that Texas is full of homophobic rednecks and bible thumpers, because it’s very true – especially in the “Bible Belt,” which is where I went to school.

I was shunned. My story went up on a Friday and by the following Monday my best friend stopped talking to me and nobody at school wanted anything to do with me. I could tell who really cared about what had happened and what had not happened.

Students in the halls whispered and made it a point to make rude and jeering remarks, all of which my principal ignored, of course.

Later I saw an article written by Kristen Henderson, one of the women in the picture on the cover of TIME, in the Huffington Post where she said “Once I got over the jolt of seeing my wife and me kissing on the cover of Time (not because we’re kissing but because it’s the cover of Time), I read the story about a really brave girl doing something that I would not have had the courage to do at her age.”

“It never occurred to us that our choice to pose for the cover of TIME would result in an 18-year-old high school senior from Sundown, Texas, becoming a hero of a movement.

What Morgan did by standing up for my family will save lives. And what her mother did alongside her will help other mothers – mothers whose kids are struggling with their own sexuality, mothers who need to teach their own children tolerance, love and acceptance – do the right thing.”

I’ve always known that I am an ally but I never felt that I had proven myself to be one until the day I stood up to my principal and, by extension, to my whole town. That day everything changed for me and I knew that my story was one that had to be told because I’m sure there is more than one person in the world that’s like me. Somebody that knows what matters in this fight and wants to do something but doesn’t have much of a platform. This event may seem small, but in all honesty it sent a shockwave through our staunchly Christian town that has a population of only 1,300 people.

Both the negative and positive stories are vital in learning what is most important in spreading tolerance. I have changed the hearts of a few already and have garnered respect from areas where I wasn’t sure I’d receive it.

It’s not always easy to change people’s hearts and minds but it is possible. Some people are homophobic because that’s just how it is where they live. If you make them knowledgeable of issues that stem from homophobia and issues the LGBT community is facing today I find that a lot of people will change their minds. I think I really have what it takes to teach people how to accept people who are LGBT.

One of the next steps I took to achieve LGBT equality was to continue to take advantage of the resources my university has for me. This semester I plan to take part in Ally Training. This is a free course offered by my university on how to handle LGBT issues in school, the workplace, and politics as an Ally. I am looking forward to finding out new and exciting ways I can help with the LGBT equality movement.

In the meantime I’ll just keep sharing my story, because somewhere out there are others like me who don’t know where to begin. It’s not just a matter of gay rights but it’s a matter of human rights. Or in the words of Chelsea Cannell from the movie “Bridegroom” – “It’s not a gay thing. It’s not a straight thing. It’s a human thing.”

Morgan hopes that sharing her story can help LGBT youth. A portion of your tax-deductible donation will go to The Trevor Project. CLICK HERE to donate.