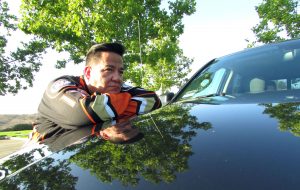 Everyone has a personal story. My name is Ricardo and I have decided that’s it’s time to share mine. This all happened in my late 20’s.

I had a boyfriend and a nice circle of friends at the time and in my mind, life was good. Two years earlier I had moved back to the states after living in Mexico for quite a while, where I left a great circle of friends and a couple of ex-boyfriends that I was still on good terms with.

Every weekend was the same – going out to party, having fun – the works. I started dating someone, and in my mind, all was good. Then one day I started to notice certain things but I really didn’t think anything of it. I was more thinking that I was just being paranoid.

One night my friends wanted to go party south of the border and asked me and my boyfriend to go with them. I declined to go, thinking it would be a perfect time to stay in and relax for once. My boyfriend wanted to go with them but didn’t want to leave me alone. I reassured him that it was fine and that he should go and have fun – he would be in good company.

The next morning, I found out that he and my best friend at the time were nowhere to be found when it came time for everyone to come back so the others left them behind. No one mentioned to me that they had decided to ditch the group and go to another club, but my friends from Mexico had seen them and said that they had seemed a little too “close” that night.

That afternoon my boyfriend called and told me that everyone had decided to leave them and that they were ditched, not the other way around. So I drove down to San Diego to bring them back and when we stopped at a rest area my friend and I were alone. I asked him what was going on and what had happened. He said he didn’t know why thy had been ditched and was upset that our other friends had left them behind.

I then asked him if there was anything going on between he and my boyfriend, because, as I mentioned earlier, I had heard that they were getting a little too close in the car. He responded that he was hurt that I was confronting him and accusing him of something that wasn’t there. He said – and I will never forget his words – “I would never do that to you; we are best friends, we have gone on trips together and I would never do anything like that to you.” Of course, why would I doubt him – he was my friend after all. And my boyfriend was blaming me – saying that if I had gone with them this would not have happened – he said that he felt like everyone was out to get him and my friend.

Everything went downhill after that. We both decided to go to LA Pride that year and were supposed to go together and meet up with everyone there. My friend decided not to meet us there but insisted that we pick him up, which we did. When we got to the club I started to notice that they were getting what I considered too close so I asked them what was going on between the two of them.

My friend and I started arguing and my boyfriend didn’t want anything to do with the argument, so he decided to leave the club. It didn’t help that my friend also ran into one of his many hookups at the same club and started to talk and flirt with him and left me alone.

I finally found them. They were arguing, but I couldn’t really hear what was going on with all the music and people around, so I got closer and they stopped arguing so we decided to leave. My friend said I should stay at his house but I said no. I wanted to go home. I am not one to like to spend the night at other people’s houses.

My boyfriend was upset and said that he would not ride with me because I had had too much to drink, which wasn’t true. But I told him to stay – I didn’t care and I just wanted to go home.

The next morning I had a bad headache and wanted to bail from going to Pride but they kept calling and calling so I went. This time it was a small group and we all walked into the festival. I told them I was going to go buy water and get some aspirin. When I got back to the spot we were supposed to meet everyone was gone. I was not in the mood to be walking around with the headache I had so I just decided to leave. When I got home I fell asleep I was woken up by a banging at my door with another friend telling me about what had happened at Pride, that my boyfriend was inconsolable and wondering why I had left without him or telling him.

Yes, he left, but he expected me to try and find him to let him know I was leaving. My friend was the only one to console him – apparently by holding him and making out with him.

The next day I saw them both and found out that this had been going on for a few months and to my surprise everyone in our circle of friends knew about it and not one of them was able to tell me about it or even give me a heads up. I was literally the last one to find out. Yes, I had my suspicions, but I always thought we were all friends – you don’t do that to friends, but yes, these “friends” did.

After several weeks of trying to digest what had happened I decided to cut them all from my life and vowed never to speak to or speak of them again. I decided to go out and party and have fun and sleep with anyone I could, not looking for a relationship.

After almost a year of going to parties and having fun, going to places my ex-friends would go to, I met someone one night who seemed nice and didn’t want to just sleep with me but rather wanted to get to know me and date. I decided that would be fine and we talked and I told him if he really wanted to actually date that I was more old fashioned in that way and I wouldn’t sleep with him until we were officially in a relationship. He agreed.

He texted me one night after about 3 or 4 weeks of talking and courting and asked me to meet him at the place we first met. I agreed and drove to meet him. We hung out had some drinks and fun. I’d had a bit too much to drink that night so I didn’t want to drive and decided to go home with him.

We were in bed and he asked if I would have sex with him. I said no, but he kept insisting. He kept trying and I said I was done for the night and didn’t want to do that yet. I turned my back to him and was about to go to sleep when I felt him get on top of me. He then said I was not going to just lead him on and not have sex with him, so he decided to go ahead and sexually assault me. I kept trying to get him off my back but wasn’t able to.

When it first began, he bit into my back and I started to struggle more trying to get him off me, then he bit me again; these were not little bites – they were so hard it sobered me up very quickly. After the second bite I mentally just shut down. I couldn’t struggle anymore. The pain of him biting me and assaulting me was both mental and physical pain that I had never experienced.

After it was over I just lay there thinking “what just happened; did this really happen to me? No, it didn’t just happen; this is just a bad dream.” He came back from the shower and got into bed and just hugged me. I slept maybe two hours that night. I was just thinking about what had happened.

About 6 am I slowly got up and got dressed, and just walked out slowly. When I saw my car I felt like it was surreal. I ran to my car and drove home. The following days I was not feeling the same as before. Over time, I started to feel less energetic. I would feel anxious when talking to people. I would get up and maybe 2 or 3 hours later I was back in bed, not wanting to do anything.

I was diagnosed with severe depression and anxiety. I had put on a mask that nothing phased me and I didn’t have any problems, but every night when I got home from work I was so mentally exhausted that I was having to put on such a strong front that I was unshakable. I didn’t want to talk about my experience. I was too embarrassed.

I always blamed my boyfriend at the time and my so-called friends, and even myself, for what happened that night. I remember what I was wearing that day; I can’t remember the exact date but I do remember it was a Thursday.

Through therapy I have finally been able to talk about it. I don’t relive it when I speak about it; rather, I talk about it in the third person, as if it was something I was watching that was happening to someone else.

I know it is going to be a long journey, but one day I will again become the person I was.

Ricardo would like you to consider making a tax-deductible donation to The Personal Stories Project, a portion of which will in turn be donated to an organization that assists victims of sexual assault. CLICK HERE to donate.