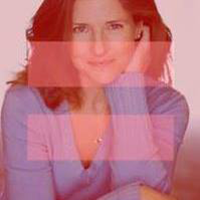 My name is Sara Stevenson Christie. I am a mom of four, a professional actress and, most recently, an LGBT rights activist. This is my story.

I was raised in a liberal, Congregational church, by relatively liberal parents. As a child, if I unwittingly made a racist or sexist comment, I was quickly rebuked and reminded that all people have value. As a teen in the acting world I had many friends that were gay and because of the way I was raised, I didn’t think to judge them based on anything but their character. Later, as a young, single mother of a 2-year-old selling real estate in the South End of Boston, I worked in an office where every person but me was gay. Those colleagues became my closest friends and embraced my little son and me with open hearts. One of them babysat for free so I could take a swing dancing class to meet friends. One of them took my son to the toy store and bought him a beautiful Thomas train set that I couldn’t have afforded but he absolutely loved. When I mentioned to my boss that I needed to go clothes shopping for my son he surprised me with a $500 “bonus”. Their love and generosity got me through a pretty tough time in my life. In my late 20’s I married my husband, Carl, and we had another son, and then twin sons a year later. Carl and I hired a wonderful young, gay man to be our nanny and he lived with us and helped us for the first year of the twins’ life. We have always raised our boys to understand that there is nothing wrong with being gay. So, as of two years ago, I would have called myself a friend of the gay community. But, truthfully, I just didn’t think that much about it.

That changed dramatically on a warm April evening in Florida. Our family was invited to the gathering of another family, including cousins, aunts and uncles. We had heard previously that one of the cousins, a teenage boy, was gay but didn’t feel he could tell his devoutly Christian parents. We had remarked over the dinner table how sad we thought that was. I was interested to meet this young man and I had a lot of compassion for him. It was a wonderful evening and I had an especially nice time chatting with that young man because he shared my interest in acting. It was also interesting to me that his parents didn’t know, because his clothing and mannerisms were quite effeminate. Later that evening my 14-year-old son Walker and I were up watching TV after the rest of the family had gone to bed. I mentioned the boy to Walker and said, “do you really think it’s possible his parents don’t know? I feel so sad for their situation. What did you think of him? He was nice, right? Did you like him?” Walker said, “yeah. I liked him” And then he smiled and blushed. He blushed! And all of a sudden I knew something. Walker LIKED him. Walker had a crush on him! I knew, for the first time, in that moment, that my beautiful son Walker was gay.

I sat up straight in my chair and looked at Walker. I asked Walker, “Did you LIKE like him?” And Walker looked down and quietly replied “yeah, mom, I think I do.” Wow. I cannot describe in words how profound that moment was for me. There was no question in my mind that Walker would be accepted and loved in our family for exactly who he was. I wasn’t upset. It was beautiful, as a mother, to bear witness to such a key moment of my son’s development from a boy into the man he will become. In that sense, it was a gift. But it was also something more. In the moment that I saw Walker blush I understood something in my heart that I didn’t understand before. I understood more fully what the term “human sexuality” means.

I remembered a day in first grade on the playground, when a little boy chased me and tried to give me a kiss. I ran away screaming, of course. But immediately upon returning home I fashioned some blankets into a dress and veil and decided I’d like to marry him. That’s when I knew I liked boys. I didn’t choose to like boys. I just knew I did, when I was six.

As an actor I know that blushing is an interesting thing. It’s completely involuntary. You can’t fake it, and you can’t hide it. So, when Walker blushed I understood that his sexuality is no different from mine or anyone else’s. His attraction to that boy, his “crush”, was no more or less than a stage in the development of who he was born to be.  When Walker blushed, I understood that “sexuality” is not really that much about sex. It’s about a blush, a first crush, holding hands, a date, a heartbreak, a relationship, maybe a marriage and a family, about finding the person who you love so much you will take care of them through old age, who you trust to make life and death decisions for you if that day should come. All of those things start with a simple attraction. What a mystery it is! What a beautiful, human mystery! And if Walker is attracted to a man, then so be it. I wish for him the full benefit of the human experience, including the freedom to love and live a life with a person he is attracted to.

Walker spent the next few months thinking about this development before he came out to the rest of the family. Occasionally he would chat with me about it. He showed me a website that had a forum for parents, because he was worried that I might have questions or concerns. It was so thoughtful, and so like Walker, to worry about me in the process. I told him I didn’t need the website, that he is loved for who he is. When Walker did come out to our family he was met with support and love. One of the cutest reactions came from my 75 year old dad, who burst into happy tears and said, “Well good for you, Walker!” I don’t think I’ve ever been more grateful for him than I was in that moment.

While Walker’s coming out was met with support and love by family and friends, I became aware that things had changed for him in a lot of ways, and not all of them good. As a mom of a gay son, I became extra aware of news of gay-bashings in New York City and other places in our own country. I realized that he couldn’t get married in a lot of states in our own country. I realized that, in some countries, he could be arrested or even put to death for admitting to being gay. I realized that he could no longer call himself a Boy Scout. Those realizations made me feel sad and angry. I started to speak out about LGBT rights. I made a sign and flew to D.C. to stand in front of the U.S. Supreme Court as they heard arguments about gay marriage. I shared Walker’s story on Facebook as I lobbied to get the Boy Scouts to change their policy banning gay members. People said some pretty hateful things to me when I did that, but I also got many messages of thanks and support, and made new friends who felt the same way I did.

One message that really stood out to me came from another mom of a gay son. She told me I was her hero. She said she wished she had the same reaction to her son coming out, but she hadn’t. This mom explained to me that she had been raised in a very conservative Christian church and lived in Texas. Her son came to her and his dad when he was 11 and told them he was gay. They were mortified and told him that being gay was a sin.  A short time after he came out to them, the mom had a dream that her son had killed himself because he thought she didn’t love him anymore. She woke up crying and went to his room. She told me she held him all night long and told him she loved him and it was going to be ok. Her husband never could accept his gay son and eventually she divorced him and she and her son moved to Oregon, where she felt he would be safer. Her son is now 20 and attends a top arts college on a ballet dance scholarship. He is a happy, well-adjusted, young gay man.

Her story made me realize that I am, by no means, a hero. But she is. She had so much to overcome, having been taught her whole life that being gay is a sin, just to love her son. But I had been given such a gift! Truly, the gift of being taught not to judge, the gift of knowing so many wonderful gay friends and colleagues, the gift of having been raised in a liberal and accepting church environment. All of those experiences made it easy to love my son for who he is. Not all people are so lucky. In fact, gay youth attempt suicide four times more often than heterosexual youth. Some parents reject their kids and they can never get them back.

Shortly after I shared Walker’s story online I was also contacted by the brother of a dear friend, Charles Chan Massey. I had met him and his partner years earlier and remembered them both fondly. Charles told me that he was compelled to be an LGBT activist and felt that we were meant to work together. My sadness and anger over LGBT discrimination, combined with my deep gratitude for the circumstances which allowed me to lovingly accept my son, put a fire in me to accept the call to become an activist, to become a person who works to change hearts and minds.  The product of our collaboration was the idea for The Personal Stories Project. As it grows and evolves through the dedication of many volunteers, I am so grateful to be along for the ride! CLICK HERE to help us continue changing hearts, minds, and lives!