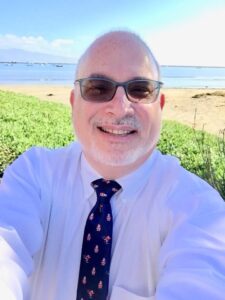 “I can look back at my life and understand that even in grade school in Detroit, Michigan, I had more attraction to the boys. And then came the confusion and isolation in junior high and high school while the other guys were dating and partying. And the realities of the 1960’s, 1970’s … no role models, only hearing nasty comments and insults for gays and no acceptance. And in the 1980’s some new visibility with AIDS.

During and after college, in the 1980’s, I worked in education and classroom work – environments that never felt very safe or comfortable to come out as a gay man. Quite the opposite was true. And then came the 1990’s and my thirties. Something amazing happened that would change everything. At a birthday lunch with a dear friend, this amazing man proceeded to come out to me! The first time I experienced someone coming out with such honesty. As he spoke, my inner voice said, ‘now what do I do?’ And when he finished speaking – and I said, ‘I am too.’ Everything changed at that moment. My coming out, once the closet doors came off the hinges, there was no going back. I came out to all my friends and family – creating a list of all the face to face coming out meetings. I hope was no longer a classroom teacher – and as a business owner for my party entertainment bands and DJ’s, I joined an LGBTQ business owners group, and began wearing a pride flag on my lapel!

I moved to California in 1994 and always smile thinking about my new found comfort level on the west coast where I could make out with a guy in a restaurant parking lot (which was incredibly surreal) or hold hands walking on the beach. I got involved in gay organizations and attended HRC dinner galas and enjoyed a robust gay community complete with restaurants, bars, and social gatherings. Coming out was the biggest turning point in my life. A big gasp of fresh air.

We survived the Prop 8 election to prevent marriage equality, we saw California and other states beginning to offer gay marriage, and then ultimately the Supreme Court ruling. Yes, we lost so many people to AIDS and rotten to the core Reagan refused to save lives. But we have victories that I’m grateful to have lived to enjoy – and there are more to come. LGBTQ people should not be fired for being gay – or denied housing, etc. The hospital visitation rules in California were amazing too – allowing gay spouses the rights and access to their loved ones.

I don’t know what my life path would have been if not for my friend and my moving to California. Now 30 years since coming out, I’m a proud gay man.” Stuart from Santa Clara, California