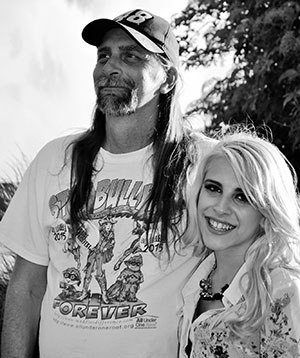 I am the single parent of DW Trantham, a 14-year-old male to female transgender activist.

First off, I will tell you that DW was born a girl. She did not at any time like boy’s toys or clothes. I assumed, early on, that her female tendencies meant she was gay. At that time, I was unaware of even the term “transgender”.

DW’s mother and I split up when she was very young. After a short stint living in another state I moved to Idaho to be close to DW. Within the next few years, a friend of DW’s showed her a story about “transgender people”. This changed her forever. Now she knew who she was and that she was not alone. To be honest, I was very mad at that lady for sharing this story with my child without my permission.

Soon the girl clothes and make-up started showing up, as well as several Barbie dolls. I tried to put a stop to all of this! “You are a boy and by God, you will act like it” was my mantra at the time. I would go to DW’s mother’s house and clean it out. I would throw away girly clothes and make-up. I went so far as to gather up all of the Barbies and burn them in the fire pit. All these things kept coming back!

Around the time she started 5th grade I moved DW into my home full-time. She was so happy to be with me at first, but when the school I put her in made her cut off her hair and wear boys’ uniforms, she was devastated. I thought that this might be just what she needed to finally stop all of this girly stuff. I did not allow this in my home!

DW soon became very depressed. I started finding things saying, “I want to die” written in notebooks and on little pieces of paper around the house. We were no longer close to each other. Counseling, I thought! That will fix everything.

It did not “fix” DW. That’s probably because she did not need to be fixed. I did! Her counselor called and told me that DW had gender dysphoria. “You people must be joking,” I said. The counselor recommended drugs for DW to help with her depression. I kind of thought that I was the one who needed “drugs” at this point.

About the same time, I was injured on my construction job and put on office duty. One day, out of boredom and curiosity, I did the unthinkable. I typed “transgender” into the search box and went surfing. What I found changed my life permanently. Suicide statistics slapped me in the face. Prejudice and discrimination kicked me in the groin. I spent the next few days in recovery from that Google search and a lot of time in self-reflection as well.

Then I began my own transformation. I realized it was time for me to change and to save my child! I made BIG changes. I got a new job and we moved to Boise. I gave DW the acceptance for which she had been searching. I told her, “You are my daughter and I love you for who you are.” Then, the unthinkable happened: I went shopping for make-up and girl clothes.

Today DW is a happy and healthy teenage girl. She is also an LGBT activist. Idaho is one of the 19 or so states that have legal protections for religion, but have no protections for the LGBT community. In this state a person can be fired, evicted or refused services for being LGBT.

The ADD THE WORDS campaign organized 10 ten years ago in an effort to get these protections by lobbying to add 4 words to the state’s human rights act. “SEXUAL ORIENTATION OR GENDER IDENTITY” are the words that need to be added to get protections for my daughter. In January 2015 House Bill HB-2 was given an open hearing.

DW and I jumped at the chance to give our testimony, along with many other people both for and against the bill. When DW testified tears filled my eyes. She nailed it. I had to follow her story with my own. I wiped the tears from my eyes, stepped up to the podium and told my story of change to the committee members.

I told them that if a man like me can come from burning Barbies to buying bras then certainly a group of highly educated, publicly elected officials should also be able to make a change. Unfortunately, I was wrong and the bill was killed in that committee. I told them if the bill did not pass we would be back. And we will.

Tim and DW would like you to consider making a donation, a portion of which will go to Trans Lifeline, a non-profit organization focused on providing front line intervention for trans people in crisis. CLICK HERE to make a donation!