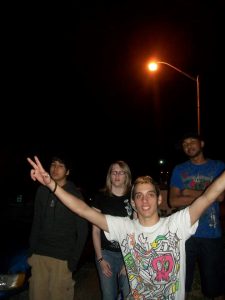 My name is Tre’shaun. This is my story.

I met Ivan back when I was a teenager in high school. He was handsome, creative, charming, and very intelligent. From day one Ivan and I became the best of friends with a natural affinity for each other. We would spend our weekends after school seeing movies, eating out, hanging with friends, or hanging out around the house. However, I always felt there was something uniquely special about him. Keep in mind, we both were not yet open about being gay, so there was some confusion for some time.

On Friday, September 3, 2010, we went to the movies to see Machete and there we had our first kiss. From that day, I began to fall in love with Ivan. Before that day, I had never kissed a guy, dated a guy, or revealed being gay to anyone. Ivan was the first and it was pretty intense to be able to have someone I could be myself around and trust heavily.

Throughout the rest of high school, Ivan and I had some rough patches that led to a roller coaster of togetherness and separation. It was from Ivan that I experienced my first devastating heartbreak. I did not just lose the guy I loved; I lost my best friend.

Despite the mistakes that were made, we would always learn from them, work through our issues, forgive each other, and at least move forward as friends. Even though we did go through a hard time, some progress was made. It was the heartbreak from Ivan that led me to grow stronger, evolve as a person, and even come out as gay to my close friends and family.

By 2012, Ivan, seventeen years old at the time, had finished high school almost top of his class as a mid-term graduate. On February 21 of that year, I went to a Mardi Gras parade in Houma, Louisiana. By an act of fate, I looked to my side and there he was. We did not talk very much, but he handed me a tiger necklace and gave me a hug. That was the last day I would see him here at home before he moved to Mexico later that week. After Ivan left, I really thought we were finished, to be honest; however, I felt it in my heart that I would see him again someday.

From then on, we experienced a hiatus. We both went on to start college, work, and date other people. However, we still continued to keep in touch on occasion. When we did Skype each other, we would pick right up where we left off. There were many nights where he genuinely expressed sorrow and guilt for his actions in the past, but I never held it against him. I embraced it because he made me stronger as a person and deep down I still loved and cared for him very much. Even though we were not together and were dating others I made it clear to him that I loved him in an unconditionally. He was always in my heart, and I only wanted for him to be happy.

After living in Mexico for some time, Ivan decided to return to the U.S. He worked, saved up, and applied for a visa. He was denied every single time for little to no reason. On the evening of April 24, 2015, I was at work and Ivan messaged me to inform me that he was on his way back to Louisiana and that he would be in Texas that night. I was jubilant. I had a very strange feeling, however, because I noticed his location on Facebook near the U.S-Mexico Border.

I messaged Ivan the next day because I had been anticipating his arrival but I did not hear anything from him. I became very worried about his whereabouts and well-being. After three days, Ivan finally got in touch with me. We skyped each other, and he explained to me that he had crossed the border, gotten caught by border patrol, was deported, and had been barred from legally returning to the U.S. for five years.

I remember him telling me of his extraordinary, perilous journey. He described the border area to be heavily guarded by the border patrol. It was very hot and humid. Food and water were very scarce. He mentioned to me how he slept in the trees with his mom and a group of other crossers. He told me that he had fantasized of rekindling our relationship after he had successfully returned. He told me his experience in the McAllen, Texas Detention Center after he was captured by the border patrol, before being deported. It was a very emotional day. He was heartbroken that he could not get back to his life here in the U.S, but I was just thankful to God he was alive and well after such a journey.

Not long afterward I immediately got in touch with an immigration lawyer to see what his options were. After going through his deportation papers, she informed me that he was actually doubly penalized. The deportation triggered what is known as the Permanent Bar, which is a ten-year entry ban with no option for a waiver. Ivan was made subjected to this penalty because he accrued over a year of unlawful presence, as a kid, growing up in this country on an expired visa. She explained to me that with this penalty, not even marriage would ensure an immediate return, in addition to paying thousands in government and legal fees. When I informed him of it, all he could do was shed tears, but we agreed to make the best of the situation.

By August of 2015, Ivan and I were practically texting and Facetiming as if we were a couple again. He had quit his offshore job and decided to go back to college for engineering. A few months later we were talking on Facebook, and he asked me to spend New Year’s Eve with him in Cancun. 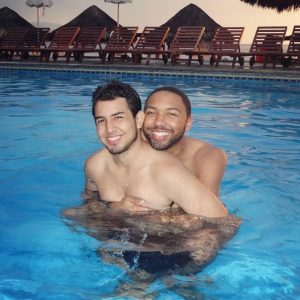 Ivan and Tre’shaun in Puerto Vallarta

I did not hesitate to say yes. I was as ecstatic as I would be if he had proposed to marry me. From that day on I worked more hours, I saved money, booked a hotel, and got a plane ticket to travel to Cancun.

In October we finally agreed to officially rekindle our relationship. Ivan had sincerely proven to me that he still loved me, that he had learned from his mistakes, and that he did not want to lose me again. By this point, all the chaos that had taken place had ironically brought us closer together. December 28,

December 28, 2015 was the day we finally reunited in person after having gone almost four years being apart. It was a magical moment getting off the airport shuttle to see him coming out of a crowd of people to give me the biggest hug. Those four days in Cancun were four of the best days of our lives. From that point on, it would be another seven months before we would see each other again for a week in Puerto Vallarta in July of 2016.

July 26, 2016, was an emotional day for me. He and I both flew back to our respective homes from Puerto Vallarta. I was so grief stricken in the airport. I felt like I was dying, having to part ways with him again. When I got home to New Orleans that night it was raining. My car hydroplaned, started spinning, and went off the road into some trees. Thankfully, I walked away without a scratch. That night showed me that life is too short to live it separated from your loved ones.

Since that night, I have started a petition, written letters to the administration, and talked to my congressional leaders. I joined American Families United, which advocates for immigrant and family rights with many people that have experienced similar scenarios. On February 14, 2017 we had a bill introduced in Congress called the American Families United Act (H.R 1036). If the bill is passed it could possibly fix our situation. Until this bill, or some similar type of legislation to help immigrants, is signed into law I will continue to fight and never give up for the one person that means everything to me.

Ivan is my significant other, my lover, my soul mate, my teacher, my best friend, and everything I want in a man. With him, I aspire to build a future, work, get married, help him become a U.S. citizen, raise a family, travel, and continue to love and care for him for the rest of my life. Nevertheless, I will persist and keep fighting until he is back here in the nation we both know as home. That is my American Dream.

Tre’shaun hopes that sharing his story can help others who may find themselves in a similar situation. A portion of your tax deductible donation will go to American Families United, an organization that offers assistance to families and couples, like Tre’shaun and Ivan, who find themselves separated by cumbersome immigration laws. CLICK HERE to donate.