Why I Loved “Love, Simon” (and why you should see it)

Why I Loved “Love, Simon” (and why you should see it) 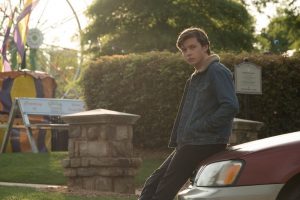 We’d been invited to several screenings of “Love, Simon,” the new movie adapted from author Becky Albertalli‘s 2015 young adult novel “Simon vs. the Homo Sapiens Agenda,” over the past several weeks. Because of schedule conflicts we couldn’t work any of the dates offered into our already crazily busy life. So last week when I saw that a nearby theater had a preview screening scheduled for tonight I quickly snagged a pair of tickets so my husband Joseph and I could attend.

I’d seen the trailer and read some early reviews, so I was aware of the basic premise, but to be honest, I wasn’t prepared for all the emotions and triggers that were in store for me. You see, I was that young man, albeit it 35 or so years ago. With a lot less technology at my fingertips. Social media? That wasn’t even a term in the 1980’s. Just like in Simon’s case, we too had one openly gay guy in school (impressive in and of itself at the time in Gaston County, North Carolina), whose visibility left an impression on me that I’ve never forgotten. But I digress…

“I’m just like you, except I have one huge-ass secret.” Boy, did they get that one right! Just like Simon, I had been holding onto my secret since I was about 12. In fact, one of my earliest memories of “gay” – not that I knew exactly what it was – surfaced within the past several years as I’ve begun working with others to help them share their own stories.

I can remember it like it was yesterday. It was 1976 – I know the year because I did a bit of research, just to make sure, once the memory surfaced – I was sitting next to my grandmother watching a television show called “Alice” about a single mother working as a waitress and raising a teenage son in Phoenix. In that particular episode, Alice was dating a retired professional football player who came out as gay. The minute he said the words “Alice, I’m gay” my grandmother stood up, walked over to the television set (they didn’t have remote controls in those days), changed the channel and sat back down. Looking forward the entire time and never saying a word.

At that age I wasn’t exactly sure what “gay” actually meant, but based on my grandmother’s reaction I was pretty sure it wasn’t something that society in general – and my grandmother in particular – was terribly fond of, so I’m guessing that experience pushed me further into the closet for several years. If “gay” was so bad that it would cause her to change the channel on a show that both of us liked watching I figured it wasn’t something I should be a part of. But, like Simon, I soon learned that I wasn’t a “part of” gay; it was – and is – a part of me.

But enough about me. “Love, Simon” is possibly one of the most important films to be released in recent years. It’s the first one I can remember being released by a major Hollywood studio featuring a gay teen in the lead role. Especially in these turbulent political times, when the LGBT civil rights movement is facing, in many cases, government-sanctioned backlash from the gains our community has made in recent years, teens need to see someone like themselves featured on screen. From my perspective, that objective was achieved in this movie.

The casting directors couldn’t have picked better actors to portray the roles, especially Jennifer Garner and Josh Duhamel, who play Simon’s parents. One scene, in particular, pulled at my heartstrings. After Simon is already out to his family and his school, he comes home one day and his dad is taking down the Christmas lights. They experience an emotional moment where his father apologizes to him for missing all the signs. Not lecturing him for his “lifestyle,” but genuinely apologetic for any jokes that he might have told that Simon could have perceived as being homophobic, displaying a genuine loving concern that he might have accidentally and unintentionally hurt his son.

That’s a far cry from what many people, especially those in my own generation, experienced after coming out to their parents, although to be fair it was a different time and the resources we have today weren’t readily available. My own parents, in particular, have long since made up for anything they may have said or done at the time because they genuinely didn’t understand.

As for the one openly gay kid I knew in high school? We’ve been reconnected on social media for several years now and tonight as the credits were rolling I sent him a message that said “Just got done seeing ‘Love, Simon.’ I’m a triggered, blubbering mess

All good triggers, but triggers just the same.”

I forgot to say one thing in that message – and that was “thank you.”